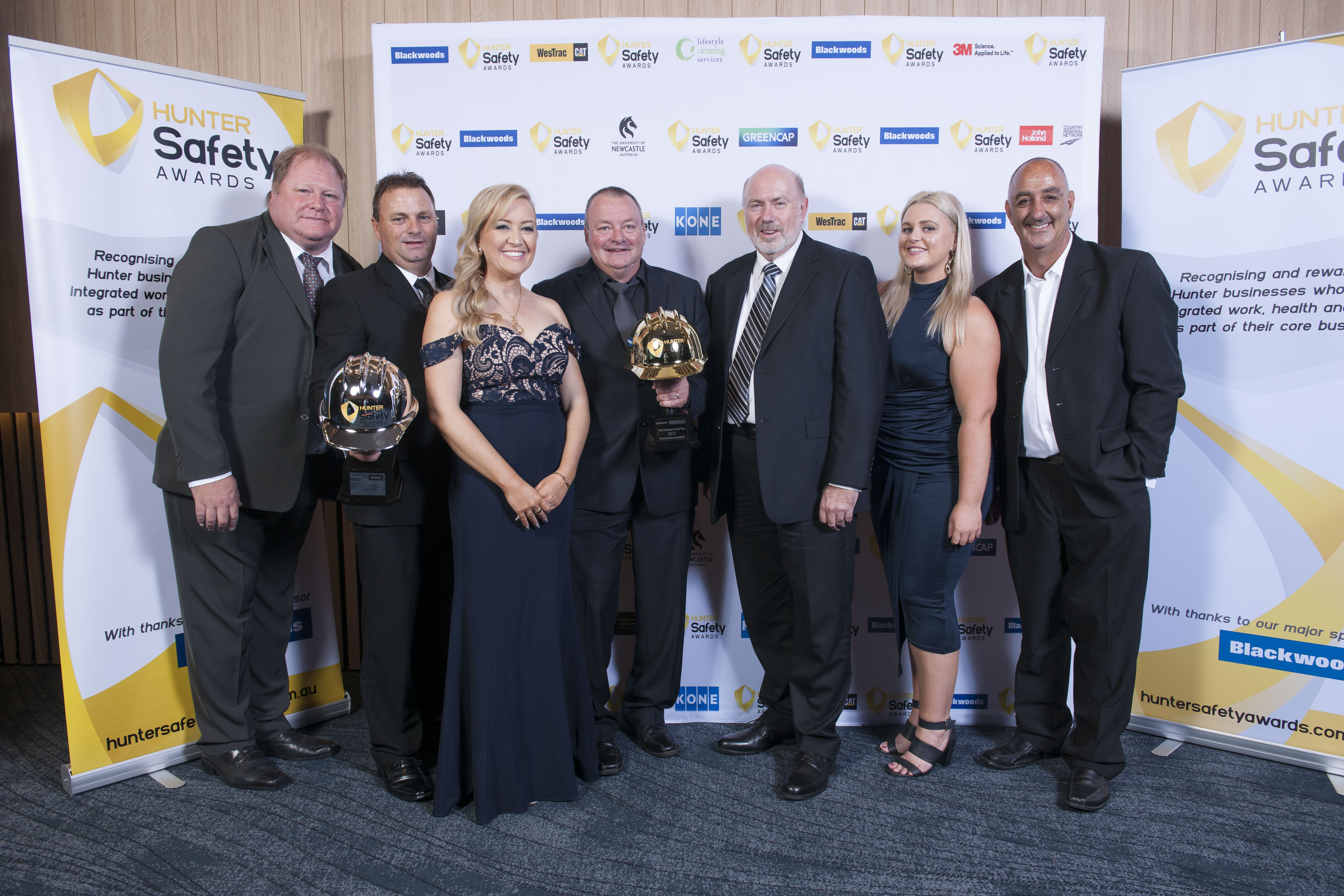 Local family owned and operated business, Mainstream Industries, were crowned the winners of the ‘gold’ safety helmet trophy as the WHS Business of the Year, sponsored by Blackwoods, at the second annual Hunter Safety Awards.

All the winners were announced at a gala awards night on Friday evening (17 March 2017) at the Newcastle Conference and Exhibition Centre.

Mainstream Industries Managing Director, Troy Rose, took to the stage with a number of his team, stating how important safety is for their team.

“We consider our team to be family and we want everyone to get home safe every night,” Troy said. “We are shocked and thrilled to have been recognised with this award, and it means a lot to us that the community understands how seriously we take safety.”

The judges said that the integrated safety management system implemented by Mainstream Industries led to their certification in safety, as well as an improved of safety standards within the organisation.

“The fundamental goal for Mainstream is that they have zero harm to employees, sub-contractors, the community and the environment in which they work. Their safety system has put in place risk mitigation to ensure this happens,” Founder of the Hunter Safety Awards, Sarah-Jane Dunford, said.

The WHS Champion of the Year, sponsored by the University of Newcastle, was revealed to be Red Insight Principal Risk Consultant, James Brown. James is a self-motivated and experienced safety professional with a genuine care for the safety and wellbeing of people.

Young WHS Leader of the Year, sponsored by Lifestyle Cleaning Services, was revealed to be Lauren Meldrum, of Reliance Hexham.

WHS Student of the Year, sponsored by TAFE NSW, was presented to Lee Oakman from GB Auto Group, Best WHS Training Course, sponsored by uvex, was announced as Training Wheels.

All finalists and winners were decided by a panel of industry experts and sponsor representatives, with a number of close decisions.

“We were thrilled – and not surprised – by the high calibre of submissions we received,” Sarah-Jane said. “It was great to be able to recognise and reward locally-based businesses and individuals who are striving to change the perception and culture of work, health and safety in front of a packed room of local organisational representatives.”

MC Andrew Daddo kept attendees entertained with his anecdotes, as well as providing background on each of the 11 winners and their impressive achievements.

Images from the night can be viewed here